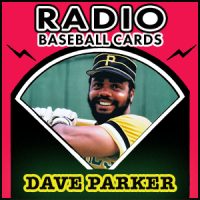 Dave Parker grew up playing ball in Cincinnati with Frank Robinson as his idol. When Frank stopped by the neighborhood, his life changed forever.

David Gene Parker (born June 9, 1951), nicknamed “The Cobra“,[1] is an American former player in Major League Baseball. He was the 1978 National League MVP and a two-time batting champion. Parker was the first professional athlete to earn an average of one million dollars per year, having signed a five-year, $5 million contract in January 1979. Parker’s career achievements include 2712 hits, 339 home runs, 1493 runs batted in and a lifetime batting average of .290. Parker was also known as a solid defensive outfielder during the first half of his career, with a powerful arm, winning three consecutive Gold Gloves during his prime. From 1975 to 1979, he threw out 72 runners, including 26 in 1977.

Parker grew up in Cincinnati near Crosley Field, where he learned to play baseball on the stadium’s parking lots.