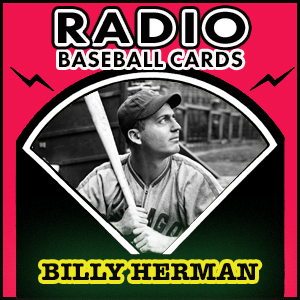 When Babe Ruth pointed to center field and called his final World Series home run, Billy Herman was playing second base for the Cubs. Herman remembers how his 1932 team was completely outmatched in that series by arguably the greatest team of all time.

Billy Herman (July 7, 1909 – September 5, 1992) played second base during the 1930s and 1940s for the Chicago Cubs, Brooklyn Dodgers, Boston Braves and Pittsburgh Pirates. He also managed the Pirates and the Red Sox.

Herman missed the 1944 and 1945 seasons to serve in World War II, but returned to play in 1946 with the Dodgers and Boston Braves (after being traded mid-season). He was traded again prior to the 1947 season to the Pittsburgh Pirates, where he assumed managerial duties, but only played 15 games. His final record as a major league manager was 189-274 (.408).

Herman holds the National League records for most putouts in a season by a second baseman and led the league in putouts seven times. He also shares the major league record for most hits on opening day, with five, set April 14, 1936.

Herman was inducted into the Baseball Hall of Fame in 1975.