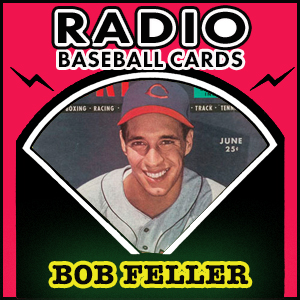 When we originally did these interviews at Spring Training in 1987, we offered each current and past player the choice of a $50 donation to their favorite charity, or $50 cash. Bob Feller was the only person that asked for the money, and wouldn’t speak to us till I went to an ATM to retrieve it. But his stories and insights were worth it, as you’ll hear here.

Robert William Andrew “Bob” Feller (born November 3, 1918 in Van Meter, Iowa), nicknamed the “Heater from Van Meter” and “Rapid Robert”, played for the Cleveland Indians, his only team, for 18 years, being one of “The Big Four” Indians pitching rotation in the 1950s, along with Bob Lemon, Early Wynn and Mike Garcia. He ended his career with 266 victories and 2,581 strikeouts, and led the American League in strikeouts seven times and bases on balls eight times. He pitched three no-hit games and shares the major league record with 12 one-hitters. Feller was the first pitcher to win 20 or more games before the age of 21. He was elected to the Baseball Hall of Fame in 1962, his first year of eligibility. When he was 17 years of age, he struck out 17 batters; he and Kerry Wood are the only two players ever to strike out their age (Wood struck out 20 on May 6, 1998).

Feller was taught to pitch by his father, an Iowa farmer, who built a diamond for his son, and installed a generator and electric lights in his barn for night practice. Although Feller’s childhood dream was to pitch for the University of Notre Dame, he was signed by scout Cy Slapnicka for $1 and an autographed baseball. On Opening Day 1940, Feller pitched a no-hitter against the Chicago White Sox, with the help of a diving play on the final out by second baseman, Ray Mack.