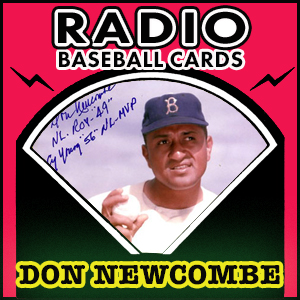 Don Newcombe was lucky to have both Jackie Robinson and Roy Campanella as teammates and mentors when he first came up to the Major Leagues. No doubt in his mind that he never would’ve had a chance if it wasn’t for their impact on the game.

Until 2011 when Detroit Tigers pitcher Justin Verlander accomplished the feat, Newcombe was the only baseball player to have won the Rookie of the Year, Most Valuable Player and Cy Young awards in his career. In 1949, he became the first black pitcher to start a World Series game. In 1951, Newcombe was the first black pitcher to win twenty games in one season.[1] In 1956, the inaugural year of the Cy Young Award, he became the first pitcher to win the National League MVP and the Cy Young in the same season.