Johnnie Bench Just Wanted to Be The Best, No Matter What He Did

HomeRadio Baseball CardsJohnnie Bench Just Wanted to Be The Best, No Matter What He Did 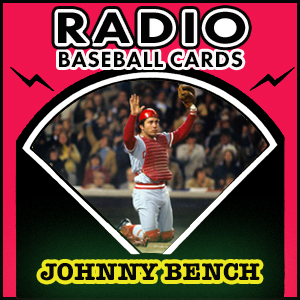 Catcher Johnnie Bench talks about his childhood goals to be the best.

Johnny Lee Bench (born December 7, 1947) is widely regarded as one of the greatest catchers in Major League Baseball history. He is currently on the Board of Directors for the Cincinnati Reds Hall of Fame.

Bench was a key member of the Reds’ 1975 and 1976 World Series championship teams known as “The Big Red Machine.”

Bench was a standout baseball player for Binger High School, in the small western Oklahoma town of Binger, the seat of Caddo County, formerly known as Hoss Spit Flats. His father advised him that the fastest route to the majors was being a catcher. He was drafted in the second round of the 1965 amateur draft and was called up in August, 1967 where he hit just .163, but impressed many with his defensive prowess and strong throwing arm. Among those he impressed during his first taste of big league ball was Hall of Famer Ted Williams, who signed a baseball for him: “A Hall of Famer for sure!”

He won the 1968 National League Rookie of the Year Award, batting .275 with 15 home runs and 82 RBIs, and the honors and accomplishments only continued to pile up. In his career, Bench earned 10 Gold Gloves, was the 1970 and 1972 Most Valuable Player and was named to the National League All-Star team 12 times. He also won such awards as the Lou Gehrig Award (1975), the Babe Ruth Award (1976), and the Hutch Award (1981). His most dramatic home run was likely his ninth inning lead-off opposite field home run in the final game of the 1972 NLCS vs. Pittsburgh. The solo shot tied the game 3-3, allowing the Reds to win later in the inning on a wild pitch, 4-3. It was hailed after the game as “one of the great clutch home runs of all time.”

Bench was elected to the National Baseball Hall of Fame in Cooperstown, New York in 1989, appearing on 96% of the ballots — the third-highest ever at the time.

He was inducted into the Cincinnati Reds Hall of Fame in 1989 and had his #5 retired.

In 1999, he ranked Number 16 on The Sporting News’ list of the 100 Greatest Baseball Players, the highest-ranking catcher, and was elected to the Major League Baseball All-Century Team.

This episode was originally broadcast as a national radio syndication in October, 1987.