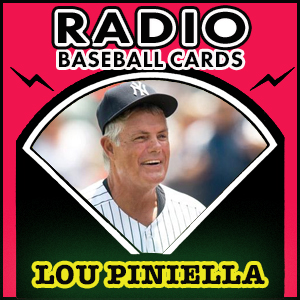 “Sweet Lou” Pinella’s first assignment as a field skipper was with the Yankees, which doesn’t make this type of high pressure job any easier.

He has been nicknamed “Sweet Lou,” both for his swing as a major league hitter and, facetiously, to describe his demeanor as a player and manager.

Piniella grew up in West Tampa, Florida. His Asturian grandparents immigrated to Florida from Asturias, Spain. As a child, he played PONY League Baseball alongside Tony La Russa.

Piniella played for the Kansas City Royals from 1969-73, and was the American League’s AL Rookie of the Year in 1969. He was the first player to come to bat in Royals history. On April 8 of their first season, he led off the bottom of the 1st and doubled to left field, then scored on an RBI single by Jerry Adair.

After the Royals, Pinella was a member of the New York Yankees for 11 seasons, where they won five AL East titles (1976-78, 1980 and 1981), four AL pennants (1976-78 and 1981), and two World Series championships (1977-78). After centerfielder Mickey Rivers was traded, during the 1979 season, Piniella became the Yankees leadoff hitter. One of the more underrated players of the 1970s (he made just one all star team), he compiled 1705 lifetime hits despite not playing full time for just under half of his career.

After retiring as a player, Piniella managed the Yankees from 1986 to 1987 and for most of 1988 before briefly serving as the club’s general manager for the rest of the 1988 and 1989 seasons. Piniella managed the Cincinnati Reds between 1990 and 1992, a tenure that included winning the 1990 World Series against the heavily-favored Oakland Athletics.

In his first two seasons with the Devil Rays, Piniella was able to improve the team somewhat, and they won a franchise-record 70 games in 2004, which was also their first season in which they did not finish last in their division.

On October 16, 2006, Piniella agreed to a three-year contract to manage the Chicago Cubs. The contract is for $10 million over three seasons with a $5 million option for a fourth year.