Mickey Hatcher on Getting Called Up to the Majors

HomeRadio Baseball CardsMickey Hatcher on Getting Called Up to the Majors 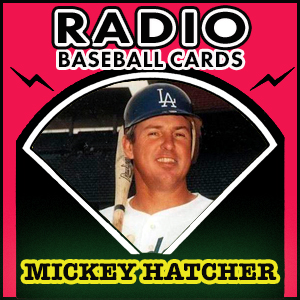 Mickey Hatcher muses on getting lost going to Dodger Stadium when he was called up to the Majors.

Michael “Mickey” Hatcher was, most notably, Kirk Gibson’s replacement for the Los Angeles Dodgers in the 1988 World Series, batting .368 (7/19) with two home runs and five RBI. He is from Mesa, Arizona.

He is admired for his fun-loving approach to playing baseball, particularly on the World Champion 1988 Dodger team, and was featured in various presentations to the tune of the “Mickey Mouse Club” song. He would sprint to first base after drawing walks, like Pete Rose, and garnered a lot of media attention in the 1988 World Series by hitting a first-inning home run in Game 1 and sprinting full-speed around the bases instead of jogging. This prompted NBC broadcaster Vin Scully to say “He’s a Saturday Evening Post character!” and “He’s running like he’s afraid they’re going to take it off the board!” Hatcher had only hit one home run in that 1988 season, but hit two in the World Series.

He is currently the hitting coach for the Los Angeles Angels of Anaheim, with whom he won his second World Series title, in 2002. The Angels are managed by Mike Scioscia, Hatcher’s teammate from the 1988 World Championship team.