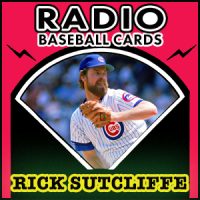 Rick Sutcliffe, nicknamed “The Red Baron”  pitched with the Los Angeles Dodgers, Cleveland Indians, Chicago Cubs, Baltimore Orioles and the St. Louis Cardinals between 1976 and 1994. Sutcliffe is currently a broadcaster for ESPN.

Sutcliffe won 17 games for the Los Angeles Dodgers and was the first of four consecutive Rookies of the Year for the Dodgers from 1979–1982. The Dodgers traded Sutcliffe to the Cleveland Indians on December 9, 1981.

Sutcliffe won 31 games over the course of the next two seasons for Cleveland and led the American League in ERA in 1982. In mid-1984, Cleveland traded a struggling Sutcliffe to the Chicago Cubs. Sutcliffe rebounded and won 16 games for the Cubs while losing only one, helping them to the division championship. On October 2, 1984, he started the first game of the NLCS against the Padres, giving up two hits and no runs, not only gaining the victory, but also hitting a home run in the third inning.

Rick won the Cy Young Award with a unanimous vote, beating out Dwight Gooden and Bruce Sutter. He also finished fourth in the league MVP voting. When he re-signed with the Cubs as a free agent the following year, his contract briefly made him the highest-paid pitcher in baseball.