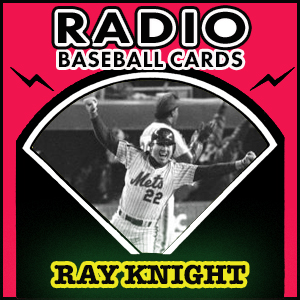 Third Baseman Ray Knight recalls his biggest laugh from his career in the Major Leagues.

While Knight is notable as being a very high quality hitter, making the Top 10 leaderboard in batting three times, he is mostly known for his role in the 1986 World Series, when he not only scored the winning run in Game 6 on Mookie Wilson’s famous grounder through Bill Buckner’s legs, but he also hit the tie breaking home run in Game 7. Due to his contributions Knight won the World Series MVP award, and then became the first player to join a new team the season after winning the award, signing with the Orioles in 1987. The Mets granted Knight free agency after it was decided that Howard Johnson would be the Mets’ everyday third baseman. His all-time statistics in the postseason include a .279 BA, with 1 home run and 7 RBIs.

In 1986, Knight also won the Babe Ruth Award for the National League and The Sporting News Comeback Player of the Year Award. He was also a winner of the Hutch Award in 1983.

In Knight’s managerial career, he is 125-137, managing the Reds from 1996-97 and in 2003 for one game. In 1997, he forgot how many outs there had been in a half-inning in which the Reds were at bat and called for a bunt at an inopportune time. He later fined himself $250 for the incident. The team’s lack of success would lead to his eventual firing and his replacement with Jack McKeon.

Knight is married to LPGA star Nancy Lopez, and briefly caddied for her after retiring.