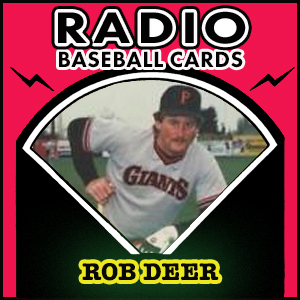 Rob Deer (born September 29, 1960 in Orange, California) is a former American baseball player. He attended Canyon High School in Anaheim and Fresno City College, and was drafted by the San Francisco Giants in the 4th round of the 1978 amateur draft.

Deer is famous for hitting the game-tying home run on Easter Sunday in 1987, to give the Milwaukee Brewers their 12th straight win to start the season. The home run was featured on the cover of Sports Illustrated. He shares the dubious honor of having the lowest official batting average while still qualifying for the batting title when he batted .179 in 1991. He is the only player since 1910 to have a batting average less than .220 in at least 400 at-bats in at least four seasons.

Deer held the American League record for strikeouts in a season (186 strikeouts in 1987) until being passed by Jack Cust in 2008, and had at least 140 strikeouts on seven occasions. Deer averaged a strikeout every 2.75 at-bats.

Deer has also gained some notoriety among studiers of baseball statistics due to his propensity for the Three True Outcomes (defined as a strikeout, home run, or bases on balls). Because of his ability to hit home runs and take walks and better-than-average fielding ability, he remained a valuable player despite his inability to hit for average, as evidenced by his career 13.7 Wins Above Replacement.

Since his playing days, Deer has had a career in drag racing, sprint car racing and has served as a roving hitting instructor for the San Diego Padres minor league system and is currently the owner of Viz-U-Bat. On November 26, 2012, Deer was named the assistant hitting coach for the Chicago Cubs, under his friend Dale Sveum, manager of the Cubs. They were Milwaukee Brewers teammates from 1986–1990. He is also very close friends with former Brewers teammates Chris Bosio (the Cubs pitching coach) and Robin Yount.

While with the Brewers, he worked for his father’s construction firm.