Robin Roberts on the 1950 World Series 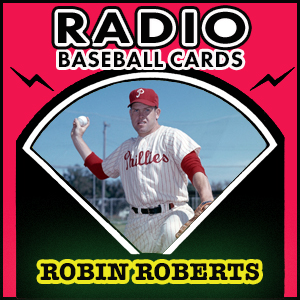 Roberts was born in Springfield, Illinois. After World War II, Roberts returned to Michigan State University—where he had attended an Army Air Corps training program—to play basketball, not baseball. Almost by accident he became a baseball pitcher for MSU. After playing for MSU and spending his second summer playing in Vermont with the Barre-Montpelier Twin City Trojans, he was signed by the Phillies.

In 1950 he led his Phillies “Whiz Kids” team, the youngest major league baseball squad ever fielded, to its first National League pennant in 35 years. Roberts started three games in the last five days of the season, defeating the heavily favored Brooklyn Dodgers at Ebbets Field, in a pennant-deciding, 10-inning game. It was his 20th victory, becoming the Phillies’ first 20-game-winner since Grover Cleveland Alexander did it in 1917. Since then, the 1950 Phillies have been known as the “Whiz Kids.”

Between 1950 and 1955 Roberts won 20 games each season, leading the NL in victories from 1952 to 1955. Six times he led the league in games started, five times in complete games and innings pitched, and once pitched 28 complete games in a row. During his career, Roberts never walked more than 77 batters in any regular season. In addition, he helped himself as a fielder as well as with his bat, hitting 55 doubles, 10 triples, and five home runs with 103 RBI.

His 28 wins in 1952, the year he won the The Sporting News Player of the Year Award, are the most in the National League since 1935, the year Dizzy Dean also won 28 games.

Despite his 28 victories in 1952, Roberts enjoyed his best season in 1953, posting a 23-16 record and leading the NL pitchers in strikeouts with 198. In a career-high 346⅔ innings pitched he walked just 66 batters, and his 2.75 ERA was second in the league behind Warren Spahn’s 2.10, narrowly missing the Triple Crown.

Roberts was the only pitcher in major league history to defeat the Boston Braves, the Milwaukee Braves and the Atlanta Braves.

Robin Roberts was inducted into the Baseball Hall of Fame in 1976.