Sparky Anderson on his Managing Debut 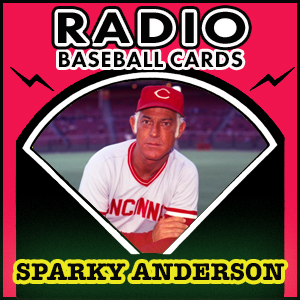 George Lee “Sparky” Anderson is sixth on the all-time list for manager career wins in Major League Baseball (behind Connie Mack, John McGraw, Tony La Russa, Joe Torre, and Bobby Cox) and is the first manager to win the World Series while leading clubs in both leagues. He piloted the National League’s Cincinnati Reds to the 1975 and 1976 championships, then added a third title in 1984 with the Detroit Tigers of the American League.

Either manager in the 1984 Series would have been the first to win in both leagues, since San Diego Padres (NL) manager Dick Williams had previously won the series with the Oakland Athletics (AL) in 1972 and 1973.

Anderson was a “good field, no-hit” middle infielder as a player. After playing the 1955 season with the Texas League Fort Worth Cats as an apprenticeship in the farm system of the Brooklyn Dodgers, he played one full season in the major leagues, as the regular second baseman for the Philadelphia Phillies in 1959. However, a .218 average with no power ended his big-league career at that point.

Anderson won 102 games and the pennant in his first Major League season as manager, but then lost the 1970 World Series in five games to the Baltimore Orioles. After an injury-plagued 1971, the Reds came back and won another pennant in 1972, losing to the Oakland Athletics in the World Series. They took the National League West division title in 1973, then finished a close second to the Los Angeles Dodgers a year later.

Finally, in 1975, the Reds blew the division open by winning 108 games, swept the National League Championship Series and then edged the Boston Red Sox in a drama-filled, seven-game World Series. They repeated in 1976 by winning 102 games and ultimately sweeping the New York Yankees in the Series. During this time, Anderson became known as “Captain Hook” for his penchant for taking out a starting pitcher at the first sign of weakness and going to his bullpen, relying heavily on closers Will McEnaney and Rawly Eastwick.

When the aging Reds finished second to the Dodgers in each of the next two seasons, Anderson was fired. The Reds won the division title again in 1979 but lost three straight to the Pittsburgh Pirates in the League Championship Series. They would not make the playoffs again until they won the World Series in 1990.

On May 28, 2005, during pre-game ceremonies in Cincinnati, Anderson’s jersey number, 10, was retired by the Reds. Anderson’s number in Detroit, 11, has been inactive since 1995. However, it has not been officially retired by the Tigers.

We lost Mr. Anderson in 2010 in Thousand Oaks, California.