Wade Boggs’ Advice for Getting to the Big Leagues

HomeRadio Baseball CardsWade Boggs’ Advice for Getting to the Big Leagues 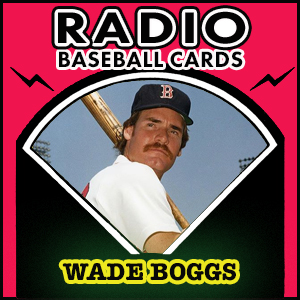 Wade Boggs, inducted into the Baseball Hall of Fame in 2005, gives advice to kids on how to get to the Big Leagues.

Wade Anthony Boggs’ hitting in the 1980s and 1990s made him a perennial contender for American League batting titles, in much the same way as his National League contemporary Tony Gwynn. Boggs was elected to the Red Sox Hall of Fame in 2004 and the Baseball Hall of Fame in 2005. With 12 straight All-Star appearances, Boggs is third only to Brooks Robinson and George Brett in number of consecutive appearances as a third baseman. His finest season was 1987 when he set career highs in HR(24), RBI(89), and slugging percentage(.588). Also in that season he batted .363 and held a .461 OBP, both stats leading the league.

A left-handed hitter, Boggs won five batting titles starting in 1983. He also batted .349 in his rookie year which would have won the batting title, but was 121 plate appearances short of the required minimum of 502. From 1982 to 1988, Boggs hit below .349 only once, hitting .325 in 1984. From 1983 to 1989, Boggs rattled off seven consecutive seasons in which he collected 200 or more hits, an American League record for consecutive 200-hit seasons that was later matched by Seattle’s Ichiro Suzuki.

Boggs signed with the Tampa Bay Devil Rays for the final two seasons of his career, in 1999 collecting his 3,000th hit. Despite his deserved reputation as a singles hitter with limited power, he is the first and only member of the 3,000-hit club whose 3,000th hit was a home run. Boggs retired in 1999 after sustaining a knee injury, leaving with a career batting average of .328 and 3,010 hits.

He is credited with teaching the Yankees their current pitch-selection technique; swinging only at perfect pitches and fouling off close but tough to hit pitches, forcing teams to go to their usually weak bullpens. Before Boggs joined the Yankees, they were 14th in pitches per plate appearance, and 4th and then 1st after he joined. In addition, the Yankees were 12th and 8th in on base percentage the two years prior to Boggs joining the team and 2nd the year he came on board (1993), followed by 1st, 2nd, 3rd, and 1st.

In 1987, Boggs – who was up for a new contract following the season – hit 24 home runs, easily the most in any year of his career.

His “#12” has been retired by the Tampa Bay Rays. Although he has not had his number retired by the Boston Red Sox, he was inducted into the team’s Hall of Fame in 2004.